The roman Valentia Origins of the city

Remains of the Valentia Edetanorum can still be found: some stretches of the wall, the aqueduct, circus, ceramics, etc … in private spaces, at street level or in the Excavations of the Almoina and Crypt of San Vicente Mártir.
Valentia was founded in 138 B.C. under the Consulate of Décimo Junio Bruto on a river island a few kilometers inland, on a small topographic elevation. But what happened before the Roman foundation? Now we already have archaeological sources that show that already before the founding of the Roman city, in what is Valencia and its orchard, there were human groups ……

We will start the visit from the Serranos Towers, where in Roman times there would be a late roman dock or pier with several channels that would come out of the Turia river, of which some remains can still be seen under the building in front of the gates.

We will pass through some streets where the Roman wall ran, and some of the sections along Salvador / Viciana and Avellanas streets, can be still seen.
We will arrive at the Plaza de la Virgen, where some headstones from the Valentia, embedded in the walls of the Basilica of the Virgen de los Desamparados (including a memorial stone dedicated to Asclepius), are still preserved. In the center of the square on the pavement you will see the stone plate of the foundation of Valentia.

Then we will visit the Archaeological Center of la Almoina, whose excavations were carried out from 1985 and 2005 and we will take a walk through two thousand years of history. In this same place is where they located the point from which, the Romans traced the future city. You will see the remains of the granary or barn, and some thermal baths built in the late 2nd century B.C. (from the republican era) and that constitutes a small republican jewel since it is one of the few examples known in the entire Roman world of such an ancient date.

Just behind the Almoina we can visit the Crypt of the San Vicente Mártir Prison, which houses a Visigothic funeral chapel with a cross plan and among other architectural elements we can see a 3.3 meter long Roman period wall painting with the decoration of a mercury head touched with the petasos (metal helmet).

We will visit the remains of the thorn of the Roman circus, which is located inside the old Medieval Cemetery (South Courtyard) of the Church of San Juan del Hospital
Also of the Roman circus we will be able to see the three enormous stones of the goal of the circus, which are in the beautiful Hotel Caro, which was once the palace of the Marquis of Caro.

Come and discover the Valentia Edetanorum !! 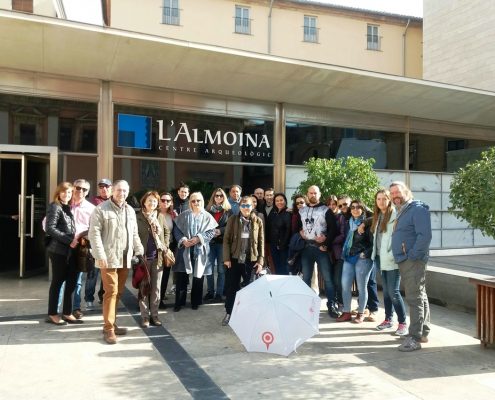 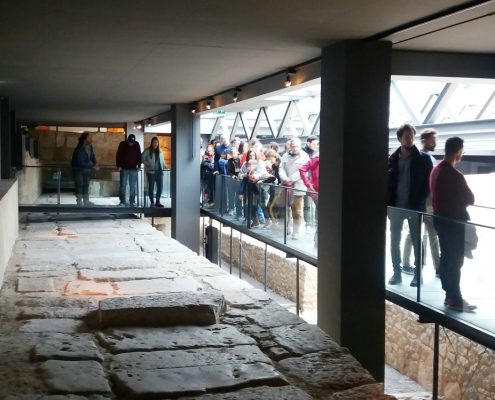